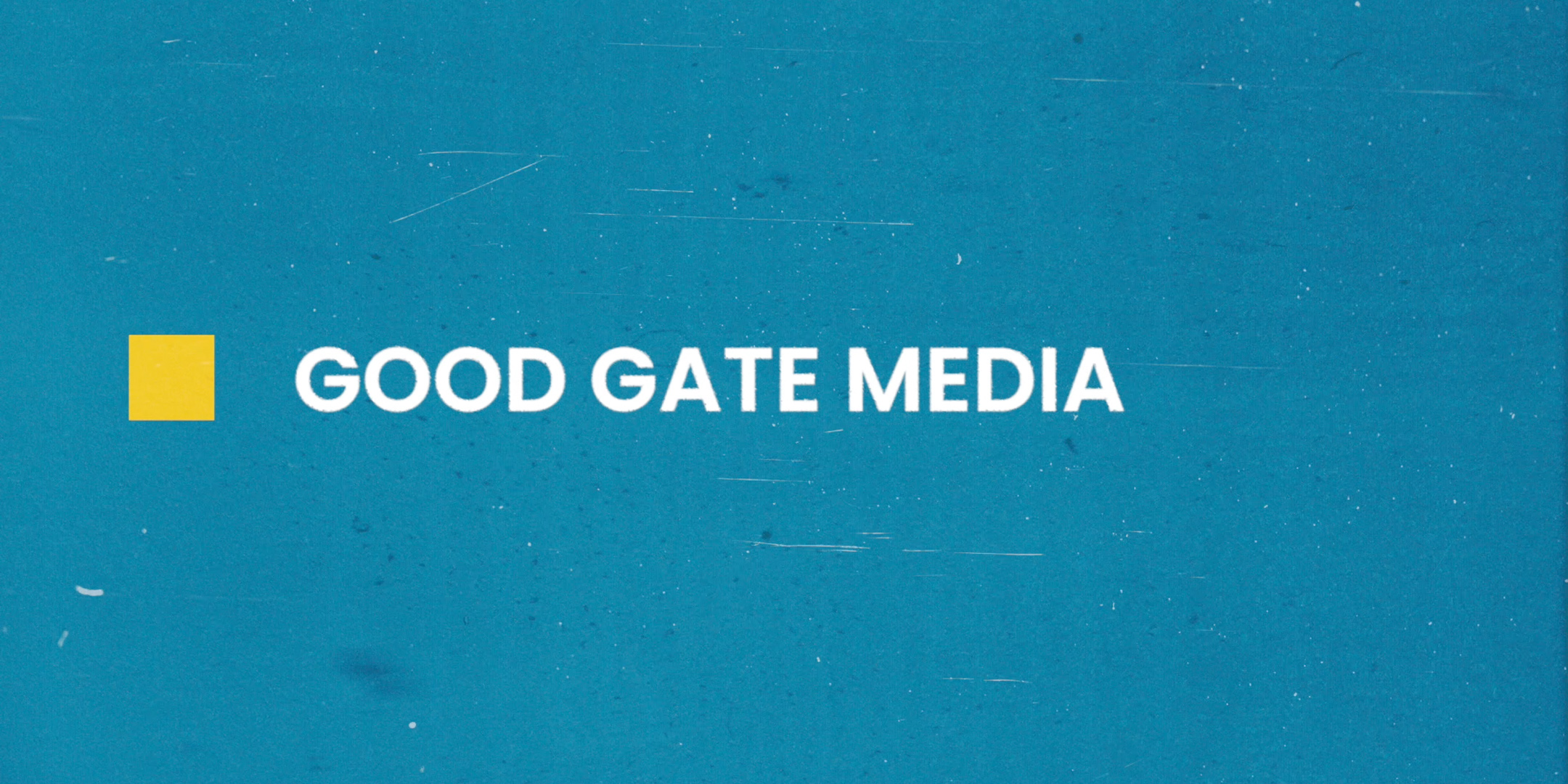 This month we are highlighting the fantastic work of our tenants Good Gate Media. John was one of the founding tenants when we opened Tramshed Tech with his film production company Red & Black.

Since then Red & Black has gone from strength to strength and John has started Good Gate Media — a production company focusing on the developing sector of Interactive Entertainment.

We sat down with John to get the low-down on Good Gate Media is going and why interactivity is the future of film. Watch the full video interview below.

Tell us about yourself and Good Gate Media

My name is John Giwa-Amu, and I run Good Gate Media at the Tramshed Tech. We were one of the first tenants, so we’ve been here for around 5 years now. Back then, I had Red & Black Films, my feature film company which I still run. We've made around 11 feature films, the most recent being a documentary called Count Me In which was released on Netflix last month. Dwayne 'The Rock' Johnson said was one of the best documentaries he’s ever seen!

About two years ago, I started a company called Goodgate Media which specialises in interactive entertainment. By that, I mean a multiple-choice live action gaming experience from the comfort of your living room. We have now financed, produced and distributed eight titles including Fighting Fantasy, which is one of the biggest interactive book series with 23 million copies sold. At Goodgate, we're making both large and small interactive titles and so far, we've been doing pretty well.

“We have now financed, produced and distributed eight titles including Fighting Fantasy, which is one of the biggest interactive book series with 23 million copies sold.”

You’ve been based at Tramshed Tech since we opened, what has the journey been like so far?

Red & Black Films we were previously based on Cathedral Road in a corporate premises. Our neighbours were lovely people but it felt very corporate and as someone who is creative and deals with creatives a lot, the vibe wasn't very inspiring to me.

When Mark John, Director at Tramshed Tech told me what he’d been working on and put the opportunity my way, myself and my business partner Caradog jumped at the chance to come and have a look around. At that time of course, it was just a bunch of bare offices with walls missing and various other things but the ethos was there - it had a modernist New York loft vibe. It also had the cinema and a bar so I was sold.

How do you see interactive live action and games shaping the future of film?

For a long time, I would say that games have been leaning into film in the sense that they look more like movies. The cutscenes are designed around movies as well as the lighting because that's a look that people like - people love movies. As an audience size though, people love games more, so it's time for film to start leaning into games too. That's what Goodgate does.

“People love movies. As an audience size though, people love games more, so it's time for film to start leaning into games too. That's what Goodgate does.”

We are part of a very nascent stage of a conversation I would say with the solid and loyal audience that we’ve been making films for. I've been lending all the skills I’ve learned on bigger productions that I've done into these smaller interactive titles. I'm very lucky that a lot of on-screen talent are happy to work with me and which is elevating the sector.

Bandersnatch opened the door into interactive live action filmmaking and there is clearly a market for that. Netflix have doubled down and opened an interactive office. They're now making content with Steven Spielberg at DreamWorks, Fox and Disney are also involved and Walmart have invested a quarter of a billion dollars into it. This is a massive sector and I think we're at the beginning of the creation of a new language. I honestly don't know where it's going to go, but I know I want to be part of the conversation.

“Netflix have doubled down and opened an interactive office. They're now making content with Steven Spielberg at DreamWorks, Fox and Disney are also involved and Walmart even put a quarter of a billion dollars into it. Interactive live action is a massive sector and we contribute to that.”

Do you have any upcoming projects you can share with us?

When I was in Los Angeles in 2017, we were shooting a pilot based on my feature film The Machine which Universal picked up made into a $9 million TV pilot which I produced. We were shooting out in Toronto and editing in Universal Studios which was a dream come true because I’ve always wanted to be in Hollywood.

Being there opened my eyes to the kind of budget that was available in TV and what was possible. When myself and Director Caradog were working on The Machine, we had a budget of under £1m which is a lot of money but not for what we created.  We’d walk onto the set in Toronto and the production designer would ask us various questions about what we wanted, one of which was, what colour do you want the Rolls Royce? We said gold. If we had said that on an independent feature film, the production designer would have thought we were mad and walk away but he just said no problem. Afterwards, I asked him how much it was and he said it cost $25,000 to make the Rolls Royce gold for three days.

Whilst I was in that world, I was looking at other projects. I’m half Nigerian and one of the things that I feel has been missing is a good international travelling story from West Africa. Nollywood is a massive industry and they make a lot of stuff for their market, but I haven't I haven't seen something of the polish and gloss that we were creating out of Los Angeles that could travel to an international audience. So, I started looking at things that would do that. Inspired by another artists work, I came up with a concept called Yellow.

Yellow started percolating inside my head as a mixed-race detective from the UK who goes to Nigeria and discovers that there’s a serial killer on the loose who is linked to a really high level of corruption. I won’t go into detail but I knew that it wouldn't necessarily be the smartest idea to go after a conventional UK writer. I wanted authenticity and I wanted somebody who understood Lagos and Nigeria as well as the UK and international.

Normally you’d go out to agents but I kept my powder dry and didn't approach any writers because I knew I wanted to wait for the right writer. Over time NneNne Iwuji-Eme was mentioned by various people, she a Nigerian born Londoner who is also the High Commissioner of the United Kingdom to Mozambique! She sounded incredible and I knew I needed to meet her.

Unconnected to this, I went to a TV conference and I met the owner - a guy called Odiri. I told him about the project which he loved and said he really wanted to be involved. He suggested that I should meet his sister and in that moment, she walked past us and it was NneNne!I couldn’t believe it. It was serendipity on a whole new level.

She came on board and really wrapped herself around the project. Since that point, we’ve packaged some incredible elements to it. We've got O-T Fagbenle from The Handmaid's Tale, Burna Boy, who won a Grammy this year, Lenny Henry is an Executive Producer with me. Caradog is working on it too and we have an amazing double Sundance nominated director called Shola Amoo. It’s a very Nigerian authentic feeling project, but with an international feel. It’s out there now and whether it finds a home we will see, but I’m really excited about it.

October is Black History Month and race has been a huge topic in the film industry over the last few years, how have you seen the industry change?

I first went to LA in 2008 and they were doing things in Hollywood that were not in the UK at that time. Maybe that was because they didn’t need to as much - America and Britain are different in terms of race and politics of race. They were placing racial diversity officers within studios who would curate the talent and make sure that there was a balanced pool.

I think the conversation has evolved a lot since then. George Floyd sparked a lot and that just happened to be ‘the incident’ that created the backlash but of course, it was a collection of incidents that led to that boiling point. I think where we find ourselves now it in a much better place than we’ve ever been. It’s an active dialogue. There's lots to do on all sorts of diversity though. I feel that disabled people are massively underrepresented.

We just hired our first female gaffer who’s the Head of the Electric Department. I’ve never worked with a female gaffer before because it’s a completely male dominated area of the industry. You see more and more camera women as time goes on, we’ve seen an increase in female directors and producers have always been quite balanced in males and females, compared to other departments anyway.

My philosophy and principle behind it is that you never want to leave talent wasted. Why would you only hire people A, if people B have also have a similar level of talent? Ignoring them doesn’t make sense. It's stupid in terms of getting the best content out there because you're overlooking a talent pool. We actively try keep our eyes open as wide as possible and never overlook talent.

How can people learn more about Goodgate Media and watch your films?

Our interactive movies are released on PlayStation, XBOX, Nintendo, Steam, iOS, Android and most recently Tencent in China.

Get the Inside Story on Red & Black Film's latest release 'Count Me In' available now on Netflix.